It is believed that the occupation of Acoma began around 1150 AD. making it the oldest, continuously inhabited city within the United States, Acoma Sky Pueblo rests upon the top of a massive sandstone mesa. The people moved after a disastrous flood denied them access to their home, another mesa pueblo, by destroying their means of ascent. They named the pueblo Acoma, “People of the White Rock.” Today there are less than 50 permanent residents, with the other Acomans living in the surrounding communities.

In the year 1540 Francisco Vasquez de Coronado’s army visited the area and he became the first Caucasian to step foot inside the Sky City. He described Acoma as one of the strongest cities he had seen, with large homes and an abundance of supplies. The mesa that the Sky City resides upon is an astounding 357 feet of sandstone, an unmatchable defense against incursions. The pueblo even resisted the attempts of the Spanish during the 1500s. 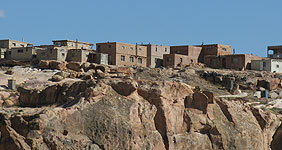 San Esteban del Rey Mission was built in 1629, completed in 1640, as recompense to the residents for the Spanish attempts to destroy the city. The construction of the mission was no easy task as the materials used were not native to the top of the mesa. All of the resources, huge beams from nearby Mt. Taylor, soil for the courtyard, and an estimated 10 tons of earth and stone, had to be manually hauled or physically carried up the mesa. The contents of the mission date from its construction up into the 1800s. Both the pueblo and the mission are now recognized National Historic Landmarks. Come join us as we visit one of the ‘must see’ locations of New Mexico.