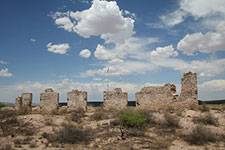 Fort Craig, New Mexico, one of the largest forts in the West, played a crucial role in both Indian campaigns and the Civil War. Though there are only ruins of what used to be this area held an important military and trade position. Established in 1854, its primary function was to control Indian raiding and to protect the central portion of the El Camino Real, a trail which stretched north from Mexico all the way to Taos, New Mexico. Fort Craig was generous in size, as far as fort standards went. Constructed on 40 acres, the fort was 1,050 feet east to west, and 600 feet north to south, and consisted of 22 adobe and rock buildings around a large parade ground. A wall of adobe surrounded the whole fort while the only entrance was on the west face. In addition the fort was again surrounded by a ditch, providing additional defense, which was unique for a fort in the southwest.

Fort Craig was built to garrison around 120 men, or two companies by military standards, but was more often home to twice that number. The fort was temporarily closed from 1873 to 1880 and reopened for five years until it was designated obsolete because the fort’s military function was no longer necessary. The fort was permanently abandoned in 1885. Nine years later Fort Craig was sold at auction to an irrigation company. The property was eventually donated to The Archaeological Conservancy by the Oppenheimer family and transferred to the Bureau of Land Management in 1981. The site is a BLM Special Management Area and is listed on the National Register of Historic Places.

The area around the fort has been inhabited for centuries. Nearby there are remnants of the Piro Indians and the El Camino Real, some of which you will visit on our New Mexico driving tours. The Piro Indians, who were pueblo settlers, inhabited the area over 700 years ago and left evidence of their farming, gathering, hunting and raising turkeys. In 1680 they left with the Spanish to El Paso, never again to return. Late in the 16th century the Spanish colonists and explorers established the El Camino Real, ‘the Royal Road’. El Camino Real was a 1500 mile route that serviced trade between Mexico City and Santa Fe for nearly 300 years. Visit the El Camino Real Heritage Center on our tour, and find out just how vital a role this overland route was in the early years of the Americas.

New Mexico Driving Tours – click on the links above to learn about other wonderful destinations that we will visit on our adventure tours! From historic Santa Fe to National Monuments and State Parks we offer you a variety of unique experiences.

If you have any questions about our Arizona Tours and New Mexico Travel please feel free to contact us at info@traveldreamwest.com. Our Southwest Adventure tours can be reserved as an individual for our scheduled departures or reserved for your own private group as a custom tour.