Come and see one of the Southwest’s most impressive National Monuments on our small group tour. 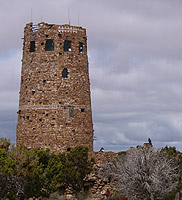 Explore the majesty of the Grand Canyon on our Southwest Adventures small group tour. The Grand Canyon’s history stretches back beyond ten-thousand years. The first inhabitants were hunter-gatherer peoples that have been identified due to small fetishes that were found in the surrounding limestone cliffs, and have been revealed to be 2 to 4 thousand years old. Fifteen hundred years later the Anasazi moved in, living in pit houses and making some of the finest baskets ever discovered. An estimated 2000 sites have been discovered within the park boundaries, giving more information on the Anasazi. It is believed that in the late 13th century they had to abandon their Grand Canyon homes due to drought and over-population. One hundred years later the Cerbat, ancestors of the Hualapai and Havasupai, move in to the Grand Canyon. And the last Native American tribe to move in to the canyon were the Navajo, the largest American tribe today, around 1400. 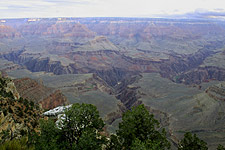 The Grand Canyon would not be seen as anything more than an obstacle to trailblazers and profiteers until after the Civil War, when a one-armed veteran of the Civil War took nine men down the Colorado River. Major John Wesley Powell led the expedition of 1,000 miles of the Colorado River in four small wooden boats, after dangerous waters, devastating heat and the death of 3 of the 9 men they completed their expedition of one of the last unexplored areas of the United States. This gave Powell credibility as an explorer and advocate of science. He later created the US Geological Survey and the Bureau of American Ethnology.

Later it was found that the Grand Canyon was rich in mineral resources, such as asbestos, copper, lead and zinc. However with the difficulties of extracting the minerals out of the nearly mile deep canyon, they decided to explore the safer and more lucrative business of tourism. Some of the miners stayed however, protesting the areas elevation to National Monument status which prevented the extraction of the minerals.

Arizona Travel – Read about the attractions above that are located close to Ajo and also visited on our southwest vacation. Click on the buttons to go to the information pages.