Explore the unspoiled beauty of these amazing caves hidden beneath the Mojave Desert.

Two young men were exploring the surrounding area in November of 1974 when they came upon a narrow fissure leading into the hillside. After following the humid air for hours, they came upon an unspoiled cavern. It wasn’t for almost 4 years that they kept this a secret from the land owners, and the owners in kind kept the whole discovery out of public knowledge for another 10 years when the land was purchased as an Arizona State Park. All involved had agreed that the caverns’ extraordinary features, both in its myriad colors and amazing formations, must be preserved as much as possible. Kartchner Caverns’ has many different speleothems, or cave formations, which are all still growing. The caverns are known not only for their pristine condition, but they also are home to some record holding formations. 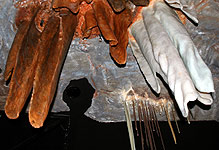 The caverns contain one of the world’s longest soda straw stalactites, the first cave occurrence of “birds nest” needle quartz, the tallest column in all of Arizona, not to mention several other amazing and unusual formations. Pictured here are some examples of formations that you will be able to see on one of our small group tours.

Small Group Bus Tours of New Mexico and Arizona – Read about these attractions, close to the Kartchner Caverns that you will also visit on our small group tour.