Tour this ancient petrified forest and compare the landscape now to what it once was as you hike among giant logs.

The Petrified Forest National Park offers one of the most diverse and colorful concentrations of petrified wood in the world. During the Triassic period this area was a lush valley full of a variety of tree species, some of these trees were fossilized into what we now call petrified wood. At least nine different species of tree have been identified within the park, most of which are one of three species. Woodworthia arizonica and Schilderia adamanica occur in the northern regions, while Araucarioxylon arizonicum represents the majority of specimens across the park. All 3 species are now extinct. Few places exist that have such a diverse record of the Triassic period. Today the elements continue to erode and remove sediments, uncovering more specimens and fossils that have long lain undisturbed. It is believed that some areas contain up to 90m of fossil bearing material yet to be unearthed. This National Park, which you will visit as you tour Arizona with us, provides a natural record book of the changing environment and geological activity throughout our planet’s history.

Over 10,000 years of human history and culture can be found at this unique National Park, some of which you can see on our tour of Arizona. Several American Indian petroglyphs are found in the southern area, messages of Hopi, Zuni and Navajo peoples from long ago. There is even an excavated site of a pueblo home made almost entirely of agate. Most petroglyph sites in the park date from about 1000-1350 A.D. The petroglyphs tend to be geometric designs with several basic design elements appearing frequently, especially spirals and circles. Petroglyphs were made by pecking away the dark surface of the rock to reveal the lighter underlying rock, often sandstone. Petroglyphs in Petrified Forest National Park are some of the best preserved in the Southwest, and provide an excellent source for scientific study. The Civilian Conservation Corps put young men to work, during the Great Depression, restoring buildings and cleaning up the land of national parks like this one. The Painted Desert Inn is just one of the many examples of their efforts. Made in a traditional Southwest style, with Hopi murals and employing petrified wood in its structure, it is now a National Historic Landmark serving as a museum and information center. 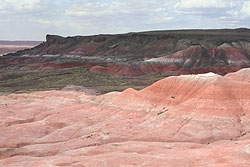 The other well-known feature of Petrified Forest National Park is the Painted Desert found in the northern section of the park. The Painted Desert covers an area of 93,533 acres that stretches southeast from the Grand Canyon into the Petrified Forest National Park. The desert derives its name from the multi-hued badlands of the Chinle Formation rocks that cover the park. Comprised of stratified layers of mineral and decayed organic matter. Hardened dunes can be found and are visually distinct due to the bands of grays, reds, oranges and yellows which are then shaped by natural wind and rain patterns. The area is noted to be especially beautiful at sunset and sunrise when the land appears to glow in hues of violet, blue, red and gold. Other key features include the many mesas and buttes that rise sharply from the desert floor.

The buttons above represent other exciting locations you will visit as you tour Arizona with Travel Dream West. From the famous Route 66 to native cultural centers and little known natural wonders our adventure tour provides a unique variety of experiences.

If you have any questions about our adventures of Arizona and New Mexico please feel free to contact us anytime at info@traveldreamwest.com. Our Southwest Adventure tours are available both as scheduled tour itineraries and as customized options for your own group.