Travel with us along the historic Route 66 on our Southwest Adventure tours. 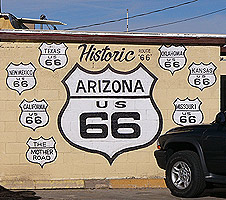 The United States’ “Mother Road”, Route 66 was the first non-linear highway in North America. It connects Chicago, Illinois to Los Angeles, California and all the rural communities in between. Born of the demands of an evolving country, Route 66 allowed for easier transport of goods to from the farms of the Great Plains to the big cities. It was the first major stepping stone for the trucking industry, which by 1930s was outpacing the railways as the key shipping agent. It especially appealed to truck drivers due to its relatively even terrain and pleasant climate, compared to the more northern routes. During the Great Depression, Route 66 was estimated to have supported the migration of 210,000 people on their way to California. Completed in 1939, just prior to the involvement of the United States in World War II, Route 66 provided a much needed supply line and transport to the newly developing military bases in the west. After the war, soldiers opted to move away from their eastern homes in favor of the areas that they had received their training in. Again the highway provided a wave of migration as they too preferred the temperate climates to the harsh eastern winters. 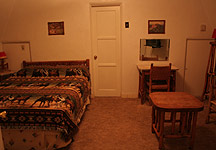 Many entrepreneurs seized the opportunity to provide for travelers. While the war effort started the growth it was tourism that ensured its continuance. And so it became a challenge to provide an inviting attraction that also peaked interest. So began the legacy of the motel, an affordable option to lodging, usually offering a quirky and unique décor that made each one stand out from the other. A prime example of this is the Wigwam Motel, where we will spend a night at, in Holbrook. This area was used as inspiration in the animated movie Cars, where even the Wigwam hotel is represented by the Caution Cone Motel in the movie. 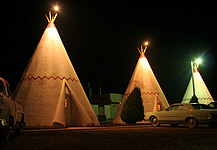 Route 66 represented a renewed optimism in the American people after the economic downfall and world war. It provided many rural communities with the necessities for growth, and many tourists a much needed outlet to view their magnificent country. However this was also Route 66’s downfall. After excessive use, and the witnessing of Germany’s Autobahn and its value in the war, Congress opted for an improved highway system, which had by 1970, nearly completely bypassed all sections of Route 66. With its 75th Anniversary it is time to look at Route 66’s contribution to American society, and many have returned to visit this national symbol. Come with us along part of the road that made America.