Come with us on one of our small group tours and visit the world famous red rock formations of Sedona. 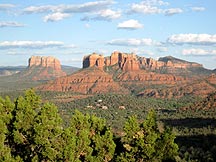 Originally known simply as ‘Red Rock’, Sedona began its early years a farming community of people struggling to survive. It wasn’t until 1902 that it gained its name. One of the original settlers of the area, a Mr. Carl Schnebly, settled here with his wife Sedona. Red Rock became a hub of trading and travel became so widely used from its general location in comparison to several destinations. Mr. Schnebly decided to petition for a post office, in 1902 after the original name of ‘Schnebly Station’ was rejected for being to long, it was agreed upon that the post office would be named Sedona after Carl’s wife. A few years later the Schneblys left, grieving the loss of their daughter in a horse-riding accident. However the town continued on always thankful for the Schnebly’s contribution. In 1995 they erected a statue in honor of their namesake.

For information about a tour visit Southwest Adventures. 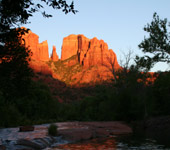 Sedona’s farming community suffered from the depression in 1930, but one of the main farmers in the area brought together a cooperative in which he delivered the produce of all the farmers in the area to the larger communities. He frequented Clarksdale, Flagstaff, Jerome, Williams, and was even known to travel as far as Phoenix to ensure that the crops were sold. Eventually the produce grown in Sedona would win prizes at the Arizona State Fair and would be used to feed troops during World War II. Sedona also became a staging point for the Civilian Conservation Corps, Franklin Delano Roosevelt’s answer to the degradation of natural resources and the lack of jobs during the Great Depression. Thus Sedona became a haven amidst the depression, somewhere that you could make a living and still enjoy your life. The area provided for many in this terrible time, and allowed many to work when jobs were scarce.

Today Sedona is famous for its amazing red rock formations that are unique to the area. These geological beauties have provided a backdrop for creative artists and movies. Beginning in the 1930s a large number of movies, many of them westerns, have been filmed in Sedona. This had provided for even more jobs when all the movie crews came to town. Today it is a haven for artists and nature lovers, with many impressive galleries and a surrounding countryside of unparalleled beauty. Join us as we tour through Sedona’s inspiring red rocks, some of the wonderful art and amazing food.