Visit the world famous silver town of Arizona and step back in time to the Wild West on our small group Southwest Adventures tour. 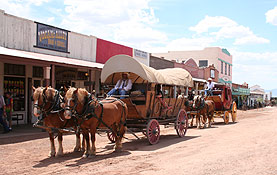 “The Town too Tough to Die“, as Tombstone, Arizona is known as, was named for the first mining strike in the area. The prospector, Ed Schieffelin, was told by a soldier that the only rock he would find, in the then Apache territory, was his tombstone. The town itself was founded in 1879, and was a boomtown by 1881 with a population of 1,000. That population rose to over five-thousand by the end of the year. Making it larger than that of San Francisco at the time. The town became a mixing pot in and of itself, business men moved in from the eastern US, immigrants from all over Europe came to work as miners. And many other immigrants came and started an extensive service industry from construction to restaurants. 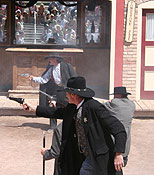 This city was famous, for its size, its wealth, its citizens, and its crime. Home to such notables as Wyatt Earp and his brothers Virgil and Morgan, John Henry “Doc” Holliday, Ike and Billy Clanton, and the McLaurey brothers Frank and Tom. The outlaws that lived in and around Tombstone were always at odds with those that ran the city. This resulted in a culmination of historic proportions. The gunfight at the O.K. Corral has become one of, if not the most, famous gunfights in history, and led to a continuance of violence in the west through 1882. Today you can watch as this gunfight is reenacted on one of our small group tours of Arizona.

Tombstone was known for its advanced luxury in a place surrounded by desolation. It had many services uncommon in the old west. Refrigeration, including ice cream and a ice skating rink, running water, telegraph and even telephone services marked Tombstone as a city of advancements and sophistication. All this developed without railway access, which came later. Not to mention the gangs of “Cowboys” and bands of Apache the surrounding area was considered one of the most wild and deadly regions in the west.

The town has survived, despite many tragedies. Tombstone experienced two major fires, one in June of 1881 and a second more destructive fire in May of the next year. The second fire marked the end of Tombstone’s ‘boomtown’ status. After about 1887 the silver ran out and most of the productive mines were flooded with water, the decline of Tombstone hastened. You can experience the “Town too Tough to Die” on our Southwest Adventure Tour and witness the re-enactment of the most famous town of the ‘Old West’.

Arizona Travel – Read about the attractions above that are located close to Tombstone and also visited on our southwest vacation. Click on the buttons to go to the information pages.